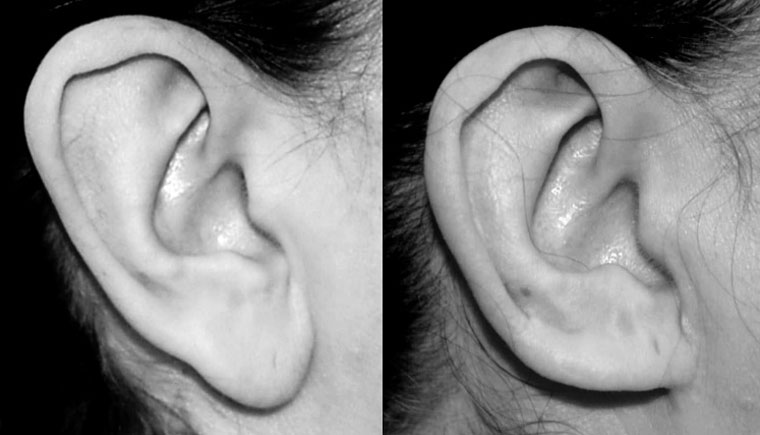 Why reduction in ear size may be required

Macrotia is the medical term for oversized ears. The term is used to describe ears that are significantly larger that the average ear size. An increase in the vertical height and width of the ear beyond the normal range makes the ears appear excessively large which can be an unattractive feature and a significant source of concern for patients.

The vertical height of a normal ear ranges from 5.5 -6.5 cm. The average for a female ear is around 5.9cm and for a male ear 6.2 cm. Usually when the vertical height exceeds 6.5 cm the ear can appear enlarged. Age, sex, height and head size all play a part in how large the ear may appear.

What parts of the ear are usually enlarged?

In the majority of cases the enlargement is in the upper third of the ear as a result of a wide enlarged scapha, also known as scaphoid fossa (shaded blue in photo diagram). The scapha is the flattened area between the helical rim (red) and the antihelix (yellow). This is the part of the ear that is most commonly reduced in ear reduction surgery. Enlargement of the scapha will make the ear appear tall and wide. The upper half of the ear may also appear prominent but ear pinning operations (otoplasty) for enlarged large ears will result in an unsatisfactory outcome. The correct procedure is to reduce the size of the scapha.

In some patients the ear lobe is the cause of the enlarged ear which makes the ear look very bottom heavy. This can be addressed by an earlobe reduction procedure. Some patients require a combination surgery to reduce the scapha and the ear lobe. Both types of reductions are safe to do and can also be performed under local anaesthetic.

How is Macrotia Surgery performed

Reducing the upper pole of the ear (Scapha reduction):

A crescent shaped area is marked on the scaphoid fossa as shown in the photo diagram. The size of this will depend on how much reduction in size the patient wants and the overall balance of the ear. Both the skin on the front of the ear and the underlying cartilage outlined by this crescent are removed leaving a gap between the rim and the antihelix. The skin on the back of the ear is not removed.

The intervening area created by the excision is closed by advancing the helical rim in a downward direction towards the antihelix. To avoid any distortion of the ear some excess in the helical rim will also need to be removed. The degree and location of the rim removal will vary between patients. The optimum scar for removing the excess rim is at the junction with the ear lobe as shown in the photo (at 3 weeks). This, however, could be located anywhere along the rim of the ear depending on the shape and structure of the individual ear as well as any previous surgery.

The closure of the crescent results in a scar hidden within the fold of the ear. The site of excess rim excision is closed meticulously and the resulting scar will be almost invisible after a few months.
The surgery normally takes about 90 minutes and is performed under local anaesthesia. The antibiotic ointment is used on the suture line which is covered with a strip of cotton wool. A wrap around bandage is applied after surgery which can be removed the next day. All the sutures are dissolvable and most activities can be commenced within 1-2 days.

There are two techniques to reduce the size of the ear lobes. The first is to remove the lower part of the lobe. The front and the back are then approximated together and the scar is hidden on the lower margin of the ear lobe and will not be visible.

This is an excellent technique for heavy drooping ear lobes and the reduction can be fully tailored to any size the patient would like to have. This technique is not optimal for ear lobes that also stick out as the reduction will not bring them closer to the head.

In the second technique a vertical and a horizontal wedge are removed from the ear lobe as shown. This advances the ear lobe forward and can also partially bring in an ear lobe which sticks out. The technique will leave a scar at the junction of the ear and the face and after about 6 months the scar is almost invisible.

Both techniques are very effective in reducing the ear lobe. As they achieve this aim in different ways the outcome is slightly different between them and it is best to assess this accurately in the clinic to decide which is most suitable.

Ear reduction surgery is a very safe operation when performed by an ear specialist as it requires experience, accuracy and appreciation of how the ear alters its shape during the reduction process. When the operation is performed with focus on precise marking, meticulous technique and appreciation of ear skin blood supply complications are negligible. In addition, by performing the procedure under local anaesthetic risks from a general anaesthetic, although extremely rare, are also eliminated.

What are the risks?

Complications that can occur following ear reduction are rare and minor. There is always a degree of swelling, most of which resolves by the second week. In the first 24 hours minor bleeding from the wound may occur which is of no consequence. Infection risk is very small (1%) and responds well to antibiotics. Scars can be slightly red in first 3 months but always settle down.

There is am increase risk complication in smokers and it is recommended to stop smoking for 6 weeks before surgery as nicotine constricts the blood vessels decreasing the blood supply. Also ears which have had previous surgery need to be assessed carefully as any scarring interferes with the blood supply. In nearly al cases, however a reduction can still be safely performed.

What happens during ear reduction surgery?

The majority of ear reduction operations are performed under local anaesthetic. Measurements and precise marking are first performed. The ear is then made numb by direct injection of local anaesthetic (same as used by the dentists).

This process takes five minutes to complete and the ears will remain numb for 3-4 hours after. The ears are then cleaned and prepared so surgery can be performed in a sterile environment. The process takes about 90 minutes during which it is possible for the patient to chat and to listen to relaxing music if this is helpful.

The eyes will be covered during the operation with a damp gauze as the theatre light is quite bright. Once the ears have been reduced in size the patient will be given a mirror to see the result and minor adjustment can still be made at this stage if the patient wishes. It is only when the patient is satisfied with the outcome then a dressing is applied.

What happens after ear reduction surgery?

At the completion of the operation antibiotic ointment is applied to the wound and soft cotton wool placed over the stitches. A bandage is then applied which will hold the dressing in place over for the first night. The bandage is removed the next day and a very soft head band is provided to cover and protect the ears. There is minor discomfort following the operation which is well controlled with paracetamol / ibuprofen. Most gentle daily activities can be resumed the next day. It is best to delay vigorous physical activities for 2-3 weeks until the wounds have completely healed. Following wound healing the ears may remain slightly tender to touch for a few months as the scar remodels. After 6 months the scar is almost invisible.

When will I see the results of ear reduction surgery?

You will be able to see the results of ear reduction surgery immediately in the operating theatre at the completion of the operation before a bandage is applied. The bandage can be removed the next day and the result of the reduction will visible but at this stage there will be some cotton wool over the stitches in the scapha and it is important to appreciate that at this stage there is some swelling. The swelling will reduce over 2 weeks and the stitches will fall out on the third week. Most of the swelling would go by the third week. The final 10% of swelling may take up to 6 weeks. The surgical scar will be slightly red initially but will be almost invisible after three months.